Speaking at a press conference organized by the Commission at its Headquarters in Abuja on Tuesday, 24th August, 2021, the Chairman, Engr. Elias Mbam made this known to newsmen who thronged the venue in their numbers.

This is coming on the heels of already outlined programmes and events which will transmute into presentation of the new Revenue Allocation Formula to the President.

He stated that the current formula in use was done 28 years ago (1992) and needed to be reviewed for various reasons.

Under the current sharing arrangement, the Federal Government takes 52.68 per cent of the revenue shared, States get 26.72 per cent while Local Governments get 20.60 per cent.

He stressed that the political structure of the country has since changed with the creation of six additional states in 1996, which brought the number of states to 36 with a corresponding increase of local governments from 589 to 774.

He pointed out that the current review focuses only on the vertical allocation, which covers allocation to the Federal, States and Local Governments and does not imply reduction in the costs of governance. It is simply that we look at the responsibilities of each tier of government and what percentage of the federation revenue would be appropriate for the type of responsibility that tier of government has.

“Because of what we have learnt from the past, we have decided that we will first handle the vertical revenue allocation formula, which is revenue sharing between Federal, States and Local governments, not sharing among states or local governments, which would come as the second phase of this review. This is going to be less controversial, and we will achieve our goals,” he said.

In an assuring tone, he said that the formula being reviewed is targeted at equitable distribution of accrued revenue into the Federation Account to the three tiers of government.

“There have been some considerable changes arising from the policy reforms that altered the relative share of responsibilities of the various tiers of government including controversies over funding of primary education, primary healthcare, etc.”

He emphasised  that some of the reasons for this review included “Inadequate/decaying infrastructure and heightened widespread internal security challenges across the country; ecological challenges like global warming, desertification, flooding, and population explosion; inability of the current vertical formula to adequately address the apparent mismatch between statutorily assigned functions and tax powers of each of the three levels of government; and agitation for a review by various interest groups including State and Local governments.”

He re-stated that the country’s new revenue allocation formula will be ready for presentation to President Muhammadu Buhari, by the end of this year. 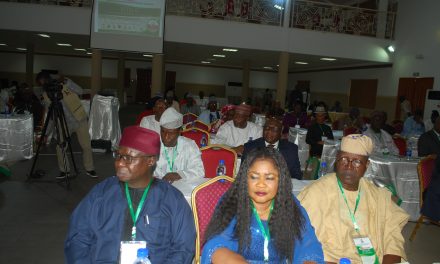 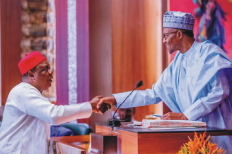 Inauguration of Chairman and Commissioners of RMAFC

Engr. Elias Mbam and Members of the Commission